Honda Civic: Ordinary SupermanThe eyes are afraid - the hands are doing, so what? It is easy, however, to say ... Right on the course is a 90-degree left, on the speedometer it…

Toyota Camry: the fulfillment of desires"Toyota Camry" new generation replaces its predecessor, produced in Japan and the United States since 1996. Official dealers offer in Russia, "Camry" only Japanese assembly in three versions: with a…

Chery Tiggo, Toyota Rav 4, Hyundai Tucson: Learn, Learn and LearnThe Japanese auto industry is seven decades old. Korean is a quarter of a century younger. The Chinese are just getting up "on the wheels." Is it possible to catch… 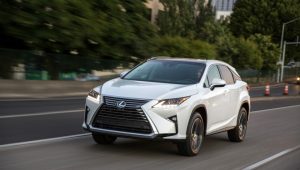 Toyota Highlander
Hybrid and hydrogen cars in their eyes cease to be a wonder, turning into full-fledged market participants. Particularly successful in this Japanese manufacturers. In developed countries, a relatively small Toyota Prius has long been sold in print runs of tens of thousands, but “green” technology remained the property of the “economy class”. Such cars were bought, mostly by those who were used to counting a penny and did not want to waste extra liters of gasoline. However, progress has reached the conservative class of representative cars: if wealthy people cannot be attracted by promises of high economy (what if colleagues don’t understand?), One can widely advertise the fashionable thesis on saving nature and “zero” exhaust.

Lexus RX 400h
The “first swallow”, the Lexus RX400h was introduced last fall, and its sales will begin in the very near future – in the USA, for example, you can make such a purchase starting April 15. In parallel, the “hybrid” will be another SUV – Toyota Highlander, which, however, will be available only in the US and Japanese markets.
But Lexus RX400h will be sold in Europe, including in Russia. A prototype toyotovtsy even brought to the St. Petersburg exhibition “Auto + Auto Mechanics.”

Representatives of the company emphasize that the “hybridization” of a prestigious car was without prejudice to its characteristics: comfort, spaciousness and driving performance is still at altitude.

At first glance, the Japanese came up with some tricky numbers game to confuse potential buyers. In fact, the Lexus RX400h is fitted with a 3.3-liter V6 petrol engine, which, in addition to its main function, spinning the wheels, also rotates the generator that powers the electric motors — front and rear. During acceleration, all three engines are laid out “to the fullest”, and even the battery will throw up energy, and with quiet movement, the gasoline engine turns only one generator. In addition to fuel economy, the latter mode also protects the engine from wear due to uneven loads.
• Lexus RX 400h
In this case, the “hybrid” trinity, headed by a V6 engine, develops 270 horsepower. This, of course, is not another V8, but 40 “horses” more than the “just Lexus’a”. From zero to hundreds of kilometers per hour, the hybrid accelerates in less than 8 seconds, and the maximum speed exceeds 200 km / h. But for all these “luxury” charms to pay increased fuel consumption is not necessary: ​​according to the manufacturer, the consumption of gasoline fell to the level of a conventional four-cylinder engine! And, to the particular joy of “green”, the emissions of harmful substances also came in line with the standards for ordinary “cars”.
But still have to pay. As it became known, in the US, the Lexus RX400h will cost 3,000-5,000 more than its gasoline counterpart. But Money Magazine journalists have calculated that the owner will “beat off” fuel savings of only $ 350 per year. The sum, frankly, for the owners of such machines is not serious. Concern for the environment is not included in the list of virtues of our elite either. What is the Japanese hope to attract customers? So the hybrid for 40 “horses” is more powerful!

Mazda 2: City ToyBright and cute "Mazda-2" reminded toy avtomobchik. Made of soft plastic, with a whistle in the bottom - twenty years ago, my youngest daughter loved to play that way when…