Honda Civic: Everything can CVTIn front of me, it seems, a completely ordinary Honda Civic. At the stern - plates "1,6iEC" and "VTEC". Everything is clear - the engine capacity of 1.6 liters with…

Do I need to redo the right wheel on the left?In light of recent changes in the right-hand drive cars on the car market is becoming more and more. And this is understandable - the Japanese cars have a lot…

Mitsubishi Carisma: Direct CommunicationThe engine is trained to manage the process of mixing and burning, even after closing the valves. In economy mode, it is able to work on ultra-poor air-fuel mixture, providing…

Toyota has built a bright future 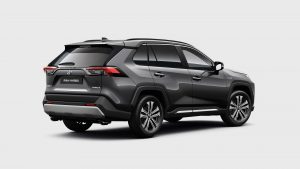 Toyota Corporation is going to conquer visitors of the Tokyo Motor Show not only with bold rework of existing models, but with a convincing demonstration of its capabilities in designing the transport of the future.

• Thanks to unique wheels, Fine X is able to turn around.
To demonstrate the superiority of Toyota in the field of “green” technologies are called Fine-X and i-swing concepts, built under the slogan “ecology and emotions”. In this case, the “ecology” is ensured by the use of hydrogen fuel cells, and an open and flexible body structure is responsible for the “emotions”: the creators of Fine-X managed to make the interior as comfortable as possible for use. Firstly, thanks to the use of “wire control” and the abandonment of hydraulics and mechanics, the Fine-X, with dimensions similar to the Yaris compact, has almost the same roomy interior as the Avensis. Secondly, the doors, made in the style of “gull-wings”, work for the convenience of the passengers: swinging up, they not only facilitate the landing, but also form a shed, saving from rain.

And, finally, the concept is crammed with all sorts of pleasant little things, like adjustable intensity of interior lighting and moving out of the car for the convenience of seating seats.

• A passenger may flop into a retractable seat and the car will do the rest.
Special mention deserves the power plant: the electricity generated by the cells is supplied to four electric motors, which thus provide a four-wheel drive transmission scheme. In addition, the Fine-X has phenomenal maneuverability: turning the wheels 90 degrees allows you to turn around literally on the patch.

• In a car, the size of the passenger compartment with the Yaris is almost like that of the Avensis.
The i-swing has become even more radical-ecological transport: the concept of the “mobile capsule”, favored by toyotovtsy in recent years, has been further developed.

• i swing is extremely environmentally friendly and economical
So, according to the Japanese, in the near future, people will move on mobile capsules consisting of a wheelchair and equipped with advanced service electronic systems.
Since the i-swing is not only light but also plastic, the driver will not only drive in it, but rather wear it like a wetsuit diver.

• the capsule does not completely close the driver
On crowded roads and in pedestrian areas, the i-swing will roll slowly using two wheels, and on high-speed sections the driver can transfer the i-swing to a full three-wheel mode and ride with the wind.
In this case, i-swing is able to memorize the habits of the owner and, with the help of artificial intelligence, brighten up boring travels.

Although i-swing will not go into the series, of course, but the persistent attention to the capsules suggests that the Japanese are engaged in this area for good reason: as you know, Toyota has already announced its desire to become a leader in the production of robots. So, perhaps, even hybrid engines for the Japanese – already yesterday.

Honda Civic: Ordinary SupermanThe eyes are afraid - the hands are doing, so what? It is easy, however, to say ... Right on the course is a 90-degree left, on the speedometer it…