Nissan 350Z: Ninja with Z signMost of the mass cars "Nissan" - "Primera", "Almera", "Micra" - are proper names. But an exclusive, a real ninja, in which a generation is already content with an index…

Mitsubishi Carisma: Reasonable SufficiencyWe have already met with "Mitsubishi Carisma" more than once, including in group tests. The car, well-known in our country, has been produced since 1995, and during this time it…

Nissan Terrano II. Buy or not?Remember the movie "Guest from the Future"? There, a bad space pirate suggested to our pioneer to give the magic device melafon, promising to donate Zhiguli for it: “Imagine you… 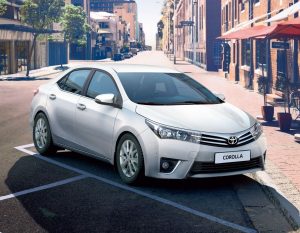 You can dream all your life about the Bugatti, and for decades to ride a modest car, produced in mass circulation. For obvious reasons. But to make such an offer in the most sought-after and competitive segment of the market, from which it would be difficult for the consumer to refuse in a hundred countries – this requires no less skillful work than creating an exclusive model. Toyota in this sense has learned a lot from the global auto industry. Corolla is a bestseller not only in Russia.

Known since 1966, having survived several “reincarnations”, the model has sold out over the years in the amount of 29 million copies. Invariably, now forty years soon, retaining its main advantage, which is in the price-quality ratio. Presented at the recent Madrid Motor Show, and now during the test drive in Barcelona, ​​the restyled version of the Corolla does not change anything in this ratio.

To please everyone is a task, you see, not an easy one. However, it is difficult to imagine a person whose friendly and elegant appearance of the Corolla could cause hostility. Indifference, a replica of “nothing special” – maybe, but not rejection. The recent “plastic surgery” has retained the attractiveness of the model and made it more modern. There were new front bumper and grille, headlights, I would say, have found a slightly playful form – and all this car to face. The rear lighting has also changed, and the hatchback also has a hood.

A car is equally relevant in a large city, and in a small village, and a man, a man, in jeans, and in a business suit will look equally good at his driving. I must admit that I was somewhat puzzled by the fact that the main buyers of Corolla in Europe are people over the age of 50 years. However, this can be explained: young people are looking for “what is more original,” they are not yet bothered to attract attention to themselves; mature accustomed to counting money, and the “podium” on the road they seem to have nothing.

In the case of Japanese automotive products, the word “consumer goods” means quality, simplicity and functionality. What is easy to see, getting into the salon Toyota Corolla. The materials used in the decoration of the seats, instrument panel or gearshift lever, do not betray the desire to save on the little things. Everything looks quite solid, nothing irritates the eyes.

The seats, including the rear, are very comfortable and have good lateral support. Already in the basic configuration, the front seats are equipped with a full set of adjustments, and after restyling, it is also possible to change not only the height of the steering wheel, but also its “departure”. And the bagel itself has become stouter, one can even say – it has become more sporty.

All controls are available and placed very logical. Dynamic drivers will like the location close to the steering wheel lever location 5-speed manual transmission with a short and clear course. By the way, the engineers spent a lot of time trying to make gear shifting enjoyable, for which they replaced the synchronizers in the box and worked on the gearshift mechanism itself.

In the upper part of the center console is a liquid crystal screen, which displays data from the on-board computer (air temperature, fuel consumption, etc.) and radio. The audio system sounds medium, which is quite understandable by the class of the car. Under the radio tape recorder there are three round knobs with which a microclimate is established in the cabin. More expensive versions can be completed with climate control systems and navigation with an LCD Touch Screen screen – that is, the mode of operation is set by simply clicking on the appropriate picture.

As it should be in a Japanese car, the headlights control is focused on the steering column switch, but a small mirror adjustment control unit – with electric drive – is perched on the left side of the dashboard. Between the front seats – a small armrest with a compartment for every little thing. There are similar drawers on the center console directly below the temperature control unit and to the left of the steering column.

The Optitron dashboard, borrowed from Lexus, is now the basic equipment for all versions. Turn the ignition key as the dark panel comes to life and the instrument scales begin to glow in a milky white color.

From a technical point of view, Toyota Corolla almost did not change, except for the above-mentioned modification of the gearbox. Gamma gasoline power units remained the same. But the choice of diesel versions is expanded, and it is a pity that they are still not delivered to Russia. Take a new turbo diesel engine: with a volume of just 1.4 liters, it develops a power of 90 liters. with. And only this engine can be aggregated with a semi-automatic gearbox, for other versions either a conventional “automatic” or a 5-speed “mechanics” is provided.

Focusing, however, on the most popular version with a 1.6-liter gasoline engine. Very balanced car.